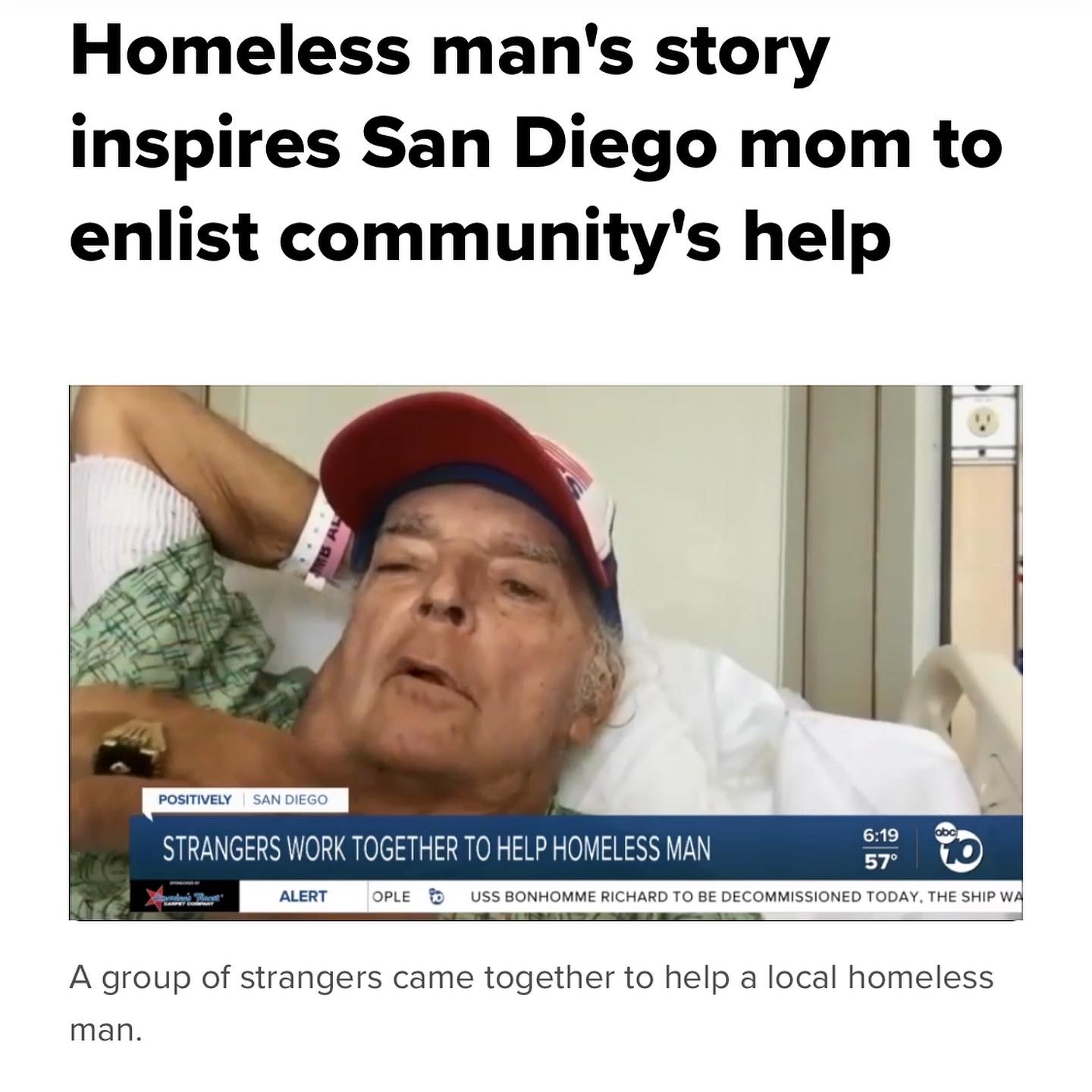 A very special thank you to the team at ABC 10 News in San Diego and Virginia Cha for featuring Les' Story on their show this morning. They did a great job of showcasing how our community has come together to help Les in his time of need. If you want to donate to Les' GoFundMe, click here. We are so appreciative to those who have already donated so generously! Keep reading for Virginia Cha's story on Les:

"SAN DIEGO (KGTV) -- When Kim Rockwell noticed a homeless man at a shopping center in Del Mar, she gave him some money. The story could have ended there, but her kids urged her to stop and talk to him.

Kim said, “He was so friendly and so nice and the kids just loved him and adored him.”

The man, named Les, grew up on a farm in Pennsylvania, got married and made his way to San Diego in the 1960s. He later got divorced, owned an oceanfront condo in Solana Beach and began a career in real estate.

Then, he filed a lawsuit for breach of contract in a real estate deal. Les said that's what changed his life.

After he lost that lawsuit, Les said about five years ago he started living in his car.

“Anybody who knows me my whole life couldn't believe how I was living,” Les said.

That's how Kim met Les, a few months ago at the shopping center. Out of compassion, the McDonald's was letting Les keep his no-longer running car there.

In late February, Kim received a call from Les asking for her help. At the age of 79, he'd been diagnosed with skin cancer, squamous cell carcinoma, and he wanted Kim's advice. She recommended Scripps La Jolla and then she got to work after being inspired by him.

“My heart broke for him when I heard his life story in the few minutes the kids and I met him. I just thought, ‘Wow.’ I mean, he really just was dealt a bad hand,” said Kim.

One of those people was Rene Flohr, owner of Bio-One of Poway. He said, “I said, ‘You know what, we're equipped to help him, my team cleans out cars all the time for people.’”

The idea was not so Les could move back in, but so the car could be sold or donated.

Rene said, “We found really everything you can imagine, and it was really full to the ceiling.”

While Les undergoes treatment, his new friends are working to make sure when he gets out, he has what he needs including a place to live. Kim says, “If I can inspire anyone else to help a homeless person, or even an elderly person who doesn't have family, that's what I want to do.”

Les was overcome with emotion when he asked what he wants to say to Kim and everyone else stepping up to help him. He calls them angels and said, “I've met some of the kindest nicest people at McDonald’s.”

The way Les feels about them, is how they feel about Les. Kim just wants people to know there are other people like Les out there.

Kim said the hospital helped Les sign up for Medi-Cal and that he's being moved to a skilled nursing facility but will continue radiation treatments. If that shrinks the tumor, then doctors could operate.

In the meantime, Rene has set up a GoFundMe account to raise money for a car that runs, a pair of glasses, some dentures and insurance for Les. Here’s the link: https://www.gofundme.com/f/help-les-get-back-on-his-feet "