Thank you to Luke Harold and the Del Mar Times for the wonderful article about Les and the community pulling together to help him out. This morning, after the article came out, we reached our goal of raising $10,000 to help Les, and we couldn't be more ecstatic! Thanks so much to everyone who has contributed, and special thanks to the Lucky Duck Foundation for their generous donation and interest in Les' story. Although we have reached our initial goal, we will continue to accept ongoing donations for Les as he navigates cancer treatment and beyond. Thanks again for all of your kind contributions!

Continue reading or click here for the full article. 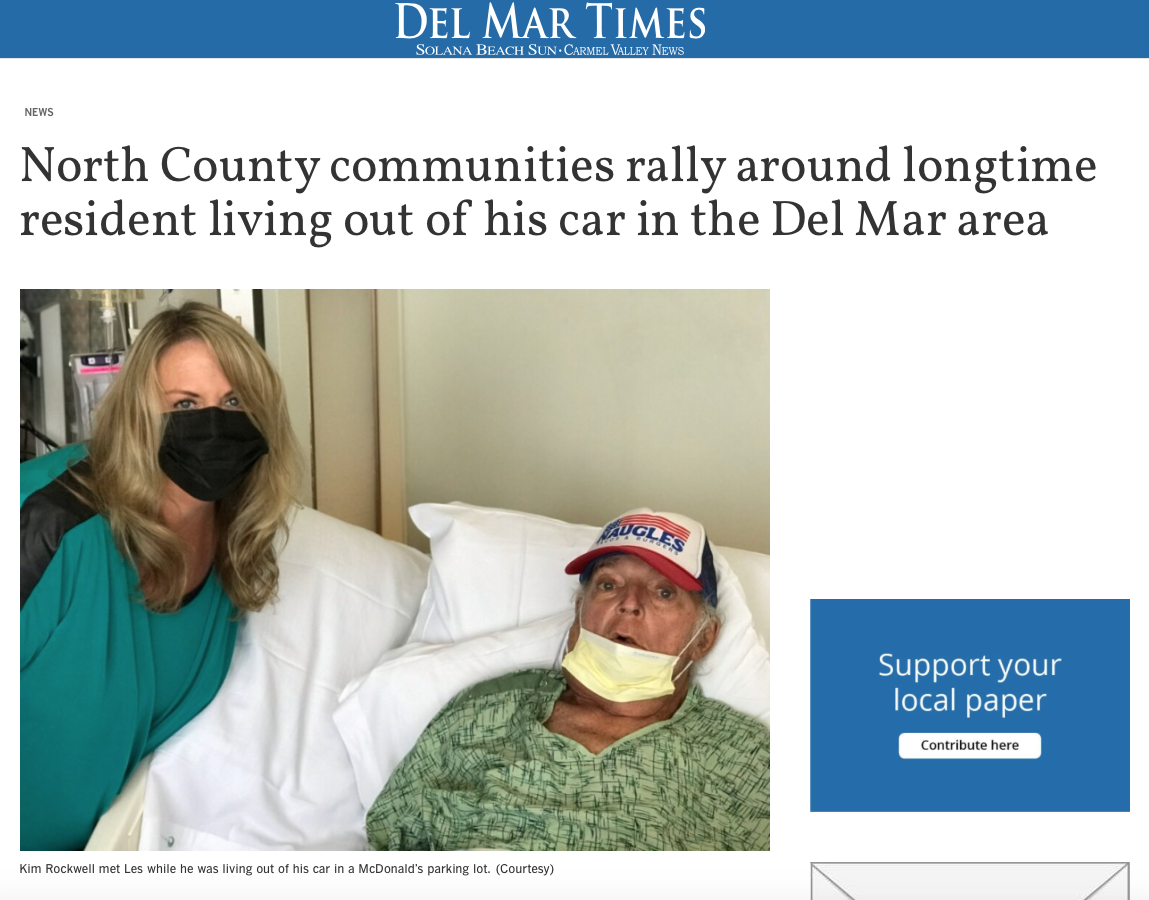 After living in a car that no longer ran, a longtime San Diego resident has found a wellspring of support from his local community.

For most of the last five years, Les, who requested his last name be withheld due to privacy concerns, had been parked in a McDonald’s off Via de la Valle in Del Mar with all his possessions. He was approached one day by Kim Rockwell, who frequents the surrounding shopping center. After giving him money several times, she said her son urged her to learn more about him.

“He said, ‘Mom why do you just keep giving him money? Why don’t you find out what he really needs?” Rockwell said.

Over the last few months she’s given Les clothes, blankets, pillows and other items. Seeking advice from the community after posting Les’ story on Nextdoor, she also helped guide him to hospitalization at Scripps La Jolla as he suffered symptoms from what turned out to be skin cancer.

As Les continues to undergo treatment, a GoFundMe page has been created to help him with the costs of a car, glasses, dentures and a few other expenses. The GoFundMe fundraiser is nearly halfway to its $10,000 goal.

Les, 79, said he grew up on a farm in Pennsylvania’s Lehigh Valley, about 60 miles north of Philadelphia. An avid Cleveland Browns and Brooklyn Dodgers fan, he idolized Jackie Robinson. Les said he was also a big fan of Philadelphia’s “Big 5” college basketball teams: Villanova, Temple, La Salle, St. Joseph’s and Penn. His favorite player was La Salle University’s Tom Gola, whose college career from 1951-55 propelled him to a basketball Hall of Fame induction in 1976.

After moving to Orange County in the 1960s to attend Santa Ana College, Les said his passion turned to business. He said his luck took a turn for the worse about 20 years ago while working as a hotel-casino broker.

In 1998, there was a merger between the Starwood Hotels & Resorts and a corporation that at the time owned Caesar’s Palace and other Vegas properties. According to a February 2000 article in the Las Vegas Sun, Les claimed there was a verbal agreement that would have provided him a 1% finder’s fee, valued at $146 million. But he never received the money after the deal was completed. Les filed a lawsuit in 2000 that he carried on through most of the decade, but came up empty.

“Anybody who’s in real estate will tell you, if they tell you they’ve never had a heartache or a disappointment, they’d be lying,” Les said. “That’s the nature of the business.”

Les, who once had a Solana Beach condo, added that the legal setback led him to homelessness. It was a difficult transition, because he’s always taken pride in being “a proud, self-producing person.” But, he added, “cancer beats you down.” The community support was much-needed.

“You’ll never meet a nicer, kinder, more compassionate human being than Kim,” Les said, recalling their encounters in the McDonalds parking lot and the assistance she’s provided since then. “If there’s such a thing as a human being being an angel, she’s an angel.”

Rockwell said she was grateful for the nearly 200 responses on Nextdoor with advice on connecting Les to the resources he needed.

“I’m a stay-at-home mom,” she said. “I can imagine what social workers go through, because this is a full-time job.”

Rene Flohr, owner of Bio-One in Poway, saw her Nextdoor post. The company cleaned Les’ car and sorted through the many possessions he had crammed inside, and set up the GoFundMe page.

“It does take a village,” Flohr said. “It is those folks who say let’s find out a little bit more. And that’s what Kim did. I’m so lucky we saw what she had posted, and doing what we do, I knew we can help. Obviously we don’t do it for money at that point, ‘We just go hey listen, we’re equipped to do this, let’s help this guy out.’”

Les said he believes luck plays a role in everything. Through it all, he added, “I’ve been blessed.”